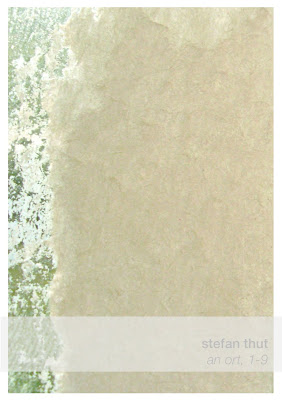 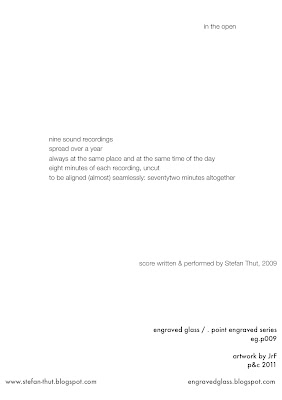 
nine sound recordings
spread over a year
always at the same place and at the same time of the day
eight minutes of each recording, uncut
to be aligned (almost) seamlessly: seventytwo minutes altogether

"i'm very pleased to be releasing this work - a 72 minute composition of field recordings that both transport the listener & focus ones attention (as all good field recording based work should) on the art of listening & the endless vista of natural sound. The subtle task of composing with these sounds is best left simple, clear & focused & that objective is achieved here by Stefan" - JrF

Tonight, another release on Jez riley French’s prolific Engraved Glass CDr label, the ninth in his .point engraved series of releases by musicians other than himself. Now, if you played me this one blind, and asked me to name the label it was released on, I think I would have guessed correctly, such is the fit between this release, Stefan Thut’s an ort, 1-9 and riley French’s personal musical aesthetic. The written score for this piece, which was both composed and recorded by Thut, reads as follows:

nine sound recordings
spread over a year
always at the same place and at the same time of the day
eight minutes of each recording, uncut
to be aligned (almost) seamlessly: seventytwo minutes altogether

The CD consists of just what the score prescribes, nine eight minute long pieces placed one after the other with no space in between. So obviously then, what is important for any particular realisation of this score is the choice of place and time of day. I imagine that if you chose to record a deserted forest at midnight nine times the results may not be so great. Or maybe they would be fantastic? perhaps the point of this composition is to draw attention to one place, wherever it may be, and through close listening notice how different one place may sound, even at the same time of day if recorded on separate days.
Thut seems to have chosen a site that sounds not that dissimilar to my own home, a suburban site, quite peaceful and full of birdlife, but also not so far from a large town or busy traffic as to remain completely separate from the sounds of human activity. After just a cursory first listen, nothing particularly dramatic seems to happen across the nine recordings here. There is a calmness to them all, seemingly recorded during the daytime while birds are out singing, and a soft grey hum can be heard, a composite of what I think may be distant roads, wind in the air, passing aircraft etc… They are all generally quite serene and gentle, but it would do Thut’s score an injustice to reduce any commentary to that.
What is interesting here (to me at least) is how recordings made, presumably with the same equipment and the same volume and gain settings each time, can sound subtly different each time, so that the joins between the recordings really stand out a mile. In a few of the recordings rain can be heard, never that heavily, even though a roll of thunder appears at one point, and on these sections the recording feels darker, perhaps due to changes in air pressure? The birds sing happier on some pieces. One, that I am guessing was recorded on a Sunday as it includes rolling churchbells, is absolutely full of the sounds of what I would have easily accepted to have been an English summer’s afternoon, churchbells, dogs barking, choruses of twittering birds, light aircraft passing overhead. Only the sound of leather on willow seems to be missing! What stands out is the overall difference in feel to the nine parts here. I sense that they were all recorded at considerably different times of the year, as, perhaps like if you viewed the same place photographically, there seems to be a different colour to the recordings, as you might expect if viewing different seasons. The most summery part of the disc includes insects buzzing close to the mic as well as all the birds. The colder, more desolate recordings, that suggest winter to me, such as the one that opens the CD contain much less activity, and somehow the greyness of the background sounds seems amplified further.
OK, so this isn’t a release for everyone. Its possibly not even a release that every fan of field recordings will enjoy, as the subject matter is hardly unusual or original. The idea to reflect one place as it changes at different parts of the year though is a very nice one, an audio equivalent to the sped-up time lapse films we see every now and again that show how particular places evolve across the seasons. I found myself listening here in manner that didn’t really consider this release as ‘music’ as such, rather as a kind of audio documentary. I wondered about the place, wishing I could see it, picturing it in my mind, maybe a suburban back garden, with plenty of trees to catch the wind and hide the birds, the local church just down the road, the neighbour’s dog lying in the sun… A nice release anyway, coupled with one of riley French’s distinctive photos that I like, but can’t easily connect to what I hear on the CD.

review from just outside (Brian Olewnick):

The site is very quiet for the most part, a soft background hum and birds (many) the most predominant elements. Airplanes, distant church bells, a dog, maybe a roadway--there's nothing "special" about the environment though, like any thoughtful listening one would do on one's own in such a place, there's a ton of things to hear. The question, as is usually the case, is: aside from the overarching structure of this piece, the revisiting of a site as described above, is there so much here that one couldn't, to some reasonable approximation, experience on one's own? Further, despite the excellence of the recording, I can't help but think my own ears would have picked up more or, to be more precise, would have concentrated on this or that aspect in a manner different from that "imposed" (if you will) on me by the recording. I'm not sure. It's an enjoyable listen, making me want to go out in my own backyard; maybe that's enough.