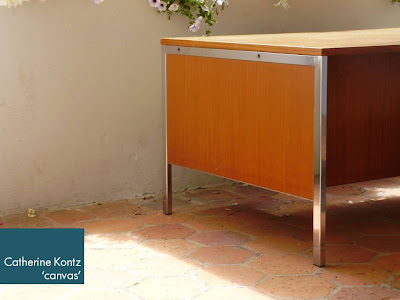 Both T-Tree and Cahiers Trouvés are part of a series of large-format ‘canvas-scores’ in which I explore different types of notation that leave the player a certain amount
of freedom and scope for spontaneity and creativity whilst keeping to the idiosyncratic
techniques and sounds of the instrument.

The score for T-Tree was a gift for my father on his 65th birthday.

Cahiers Trouvés was commissioned by Rational Rec and written for Henri Växby.“ (C.K.)

Further details and images coming soon on this site & here 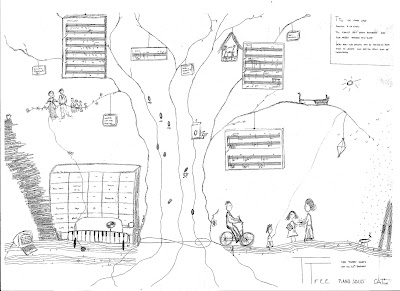 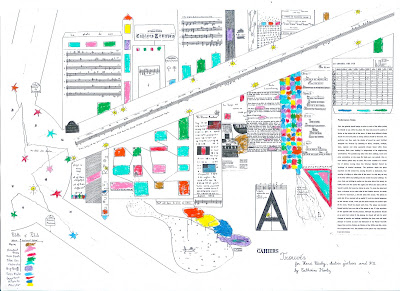 The pianist may start anywhere and move free through the score. Every part and drawing may be played as many times as wanted and not all parts must be interpreted.

First, the guitarist should assign a colour to each of the effect pedals he intends to use within the piece. He may note down his palette of choice at the bottom left of the score. At least three different effects should be used and prime or strong colours should be favoured. The performer can then mark his choice of sound for each ‘building’ alongside the ‘Avenue’ by colouring in doors, windows, rooftops, stars, squares and other geometric shapes found within these structures. Each such ‘building’ is independent of its neighbouring constructions. The guitarist may also write down settings, levels and other annotations on the score (in black pen, not colour). One or more electric guitars may be used. The score consists of a central line of pitches running down the ‘Champs Elysées’ framed by ‘buildings’ of musical structures. The performer starts the piece anywhere on this central line, moving forwards or backwards, then entering a building on either side of the street. He may stay as long as he likes within any building and also revisit the same buildings. To move from one building to another on the same side of the street, he briefly exits onto the central line again and follows the stave until he ‘stands’ outside the house he wishes to enter. To cross the street and enter a structure on the other side of the Parisian avenue, he needs to take the ‘ascenseur’, a lift that takes him across. The places to catch this lift are marked with a capital ‘A’ and the chordal sequence for the elevator music, which can be found towards the bottom right of the score, should be played each time. The player can transfer himself quickly from one side of the street to any ‘A’ sign anywhere on the opposite side via this process. Although the performer should at no point feel rushed in his playing, he should still aim for quick changes of sounds and settings, mimicking the jump cuts and rapid changes of scenes as seen and discussed in the French Nouvelle Vague films and the Cahiers du Cinéma of the 1950s and 60s, which have inspired this work.

The duration of the piece may vary between 9 and 23 minutes.

review by Richard Pinnell can be found here
Posted by Jez riley French at 4:42 PM No comments: