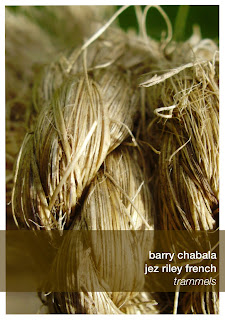 
review by jesse goin (crow with no mouth website):


That definition certainly comes to mind listening to much of the recent output of fellows like Jez Riley French, Barry Chabala, Daniel Jones, et al. On Trammels, French and Chabala offer four pieces, three photographic scores by French, and a long-distance sound file collaboration. The first two scores are interpreted by Chabala alone; these are works of medium duration and considerable dynamic range. Chabala's assurance and deft handling of appositely placed sounds and silences continues to impress. He works with seamless segues between silent and near-silent sustained tensions, and surges of floating guitar tones that are simply gorgeous.
These are photographic scores that blend, blur, and cross-fade naive guitar melodies, the shimmer and aura of chromatic droneage, the throbs and oscillations captured on recordings of traffic, both aerial and earth-bound, and, on the third piece, where French takes a solo turn, a mesh of elemental colors issuing from French's arsenal of salt, glass, paper and coiled wire. This last, entitled (...) a coda, ranks easily alongside the aforementioned Daniel Jones' exacting When On and Off Collide [Cathnor 007], as the quietest music I've listened to in a long while. [While I am referencing Jones' work, I'll mention it overlaps with Chabala's approach to sustained silences and surges, and you'd do well to check it out].
Weft and mesh are apposite words for this excellent release, as a trammel is a net woven of both very fine and very coarse materials.

Tonight then to another new CD on Jez riley French’s Engraved Glass CDr label, a new duo disc by Jez alongside the New Jersey based guitarist Barry Chabala. The disc was put together at a distance, via file exchange, and is namedtrammels. There are four pieces here, the first three of which would appear to be interpretations of some of French’s photographic scores, which are (usually) abstract images sourced from photos taken by French that are then presented without any further text, open to interpretation by the musicians. The first piece, titled bruxelles score #3opens with a bold, urban sounding field recording that captures an aircraft passing over what appears to be a city, though all we hear is a distant blur of sounds. Chabala is (I think) credited with field recordings on three of the four tracks here, and French has a guitar listed amongst his instrumentation so it would be wrong to assume where each of the sounds come from here, though the electric guitar that punctures the field recordings in a kind of slowed down Baileyesque manner certainly sounds like Chabala to me. This piece is nice, simplistic and maybe predictable, but its Chabala’s playing here that really makes the piece, his chiming, quiet guitar patterns, separated into four groupings as per the score’s four images seem to flow out of the murky backdrop in a very natural manner. Thinking about it, as I tip can listen right now its Loren Connors’ music that springs to mind, a kind of slightly disconnected, deathly slow, electric blues. Chabala leaves huge silences though, where as listeners we settle back into the grey of the field recordings, which have actually been slightly treated here and there.
The second piece, another realisation of a photographic score named score for ivan & anna is a different affair. Opening with a simple rhythmic pattern of slowly changing glassy high pitched tones that kind that resemble a church organ, this section lasts a couple of minutes as a very quiet, bass heavy murmur throbs along in the background. The effect at this point in the recording is almost Eno-esque, almost chillingly smooth ambient sounds. After a few minutes though everything does away as the duo follow the chopped up imagery on the score. We are met with virtual silence punctuated every so often with little shuffling sounds, maybe a recording of the salt that French has listed amongst his instrumentation being poured onto a surface of some kind. The ambient tones then come and go as the quiet rustling stops and starts, with much space often between sounds. There is something about this piece that leaves me a little disconnected, most probably the high pitched tones and the connection I make with them, but structurally this is a very nice track that really benefitted me once I listened through headphones as its a quiet affair.
If the second piece was quiet though then the third track, (….) a coda is just about non-existent. For the first five minutes or so, even with headphones it feels like we hear nothing at all, until the slightest, quietest field recording can just about be detected, more featureless urban greyness again, until a few soft tones appear, maybe guitar generated, and still only just above the audibility threshold. The tones stick around for about a minute before they leave just the faint environment of the field recording behind, the odd passing car, the slightest possible trace of dogs barking, all so so quiet that a casual listen would assume the track was silent. This sort of piece obviously appeals to me a great deal. The idea of sounds shifting in and out of recognition, just faint half shadows of things that dissolve back into the blank canvas before they can really be savoured is an interesting one that you might think has been done to death but in fact there isn’t a lot out there quite like this. The fourth piece, named trammels is a busier affair but still doesn’t exactly break any noise barriers. The sounds here are very different, electronic buzzes, bits of guitar abstraction, partly sounding like the instrument being plugged in, but then slowly growing out into pastel shaded little flushes of colour. An acoustic guitar breaks the surface of the silence at one point, just a few stray notes here and there. This may well be the moment that French plays guitar rather than Chabala as some of the American’s incredibly subtle control is missing here but I can’t be sure. Clocking n at twenty-one minutes this piece is the longest here, not my favourite of the tracks but still an intriguing work that balances the ugliness of the rough electronic buzzing against a softer seemingly electronic undertow and the various guitar scrabbling. This piece is the only one not realising a photographic score, and somehow it does feel more loose than the others, which is actually surprising given the somewhat indeterminate form of the scores themselves.
trammels isn’t perfect, there are brief parts which I didn’t enjoy so much, though merely just as a result of them not appealing to my particular tastes, but when it does hit the right spot, as it most certainly does on the third track here, its a really wonderful work. I’d really like to hear somebody produce a full album of music that exists only at the very far traces of audibility like (….) a coda does here, not just leaving big silences, but letting the sounds themselves only just exist as the slightest of smears when they do arrive. For now this track is exceptional, and the rest of the album merely very enjoyable indeed.
Posted by Jez riley French at 9:35 AM