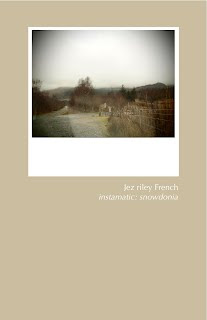 
Review by Daniel Crokaert from 'The Field Reporter' website:
In his Instamatic series, Jez riley French invites us to share his moments of fortunate listening like they are, without make-up nor intellectualizations, retouches or alterations of the source, except a careful selection and probably a bit of equalization… A hike within some magnificent natural region of North Wales, namely Snowdonia, led Jez to look particularly into the wind, that wind which speaks to us, while sweeping at the same timeendlessly across ever changing landscapes… that air which circulates, lifts, makes particles, objects and surfaces vibrate, suggesting their outlines and concrete features…
But, far more than a report about a physical truth, the work quickly switches over to the extra-ordinary, underlining a very personal way of experiencing, of giving another dimension to things, and our environment… Vast palette of amplified metallic resonances of fences planted in the isolation of a still preserved nature…agitation, vibrations, ferruginous supplications…a whole universe stands out, and submits to the laws of another one…a unhurried play of echoes and reflections coming out of the insignificant, and which reminds us constantly that our perceptions are fluctuating, eminently subjective, and tributary of their “captation tools”, but that they can also be the starting point of unexpected emotions… “There’s an aesthete within us all “ seems to be, roughly speaking, what Jez whispers to us.
Through his care, his methodical record, his sense of listening, the creation of his own range of microphones, Jez acts like a revealer, a non-standard intermediary… “Snowdonia” succeeds in closing our eyes slipping us into a long travelling through shaggy herbs, dishevelled by an insistent breeze – a Malickian scene… Just next to us, trembling & bending wires, streaking the rust tones of a jaded vegetation…pebbles shrouded in history shape long grey veins studding the country as far as the eye can see…in the faraway, the shadow of hills asleep, peaceful guardians of a permanent sight… In our ears, clicks, muffled murmurs of cold metal, aeolian moan, all the tense sensoriality of the world…
“Snowdonia” ends up ringing like the name of a mythical place where one has rendezvous with the other-worldliness…that other-worldliness, disguised under common appearances, here finely caught, and alongside which we often pass by in total indifference…
Posted by Jez riley French at 9:51 AM