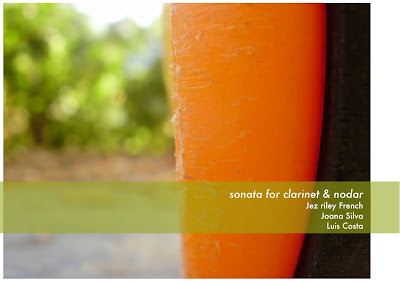 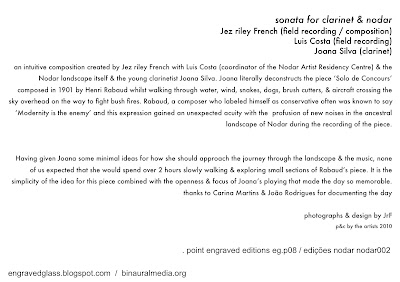 Jez riley French (field recording / composition)
Joana Silva (clarinet)
Luis Costa (field recording)
egcd035 / nodar002
(a joint release between engraved glass & edições nodar)
in the last days of my residency at binaural (Nodar, Portugal) an idea came from a series of chance occurrences. Luis spotted Joana in the village & knew she was a clarinet player & that she had come from Lisbon to visit family for the summer. In the days before, myself & Luis had talked about recordings of instruments & singers in the natural environment - the roots of field recording. A decision was made to ask Joana if she would be willing to play her clarinet whilst walking slowly along a path that swept around the curve in the Paiva river that runs through Nodar. Joana, still at school, still learning the instrument, agreed & a day was arranged.
I think it's fair to say that what took place was truly a unique moment. This was not a 'perfect' realisation of a score that had been rehearsed. This was not a seasoned performer with a vast experience of contemporary composition playing a piece they knew well. Instead what was captured was a young player truly exploring the idea for the piece. There was no detailed instruction to her in regards to overall duration or the space between the played sections. This, therefore, is a composition of a moment.
Of course, the very nature of field recording & one of it's charms, is that it is a gesture to capture an unpredictable environment. Given the rural nature of Nodar village some aspects of everyday village life were bound to make an appearance. It was another chance occurrence that at the time we were recording someone decided it was time to trim the overgrowth on their plot of land with one of the loudest machines invented for the purpose. As this sound went on & on my thoughts went from frustration to resignation - we were, after all, capturing an aspect of life as it was happening. In composing the final piece it would have been possible to leave this intervention of modern rural reality out. However doing so would have also removed a memorable part of the experience.
It is the emotive capture of this day, this moment that motivated the composition drawn from the recordings made that day & the decision to create this release.
my thanks to Joana for her openess, exploration & dedication to the essential qualities of the music (both performed & environmental) & to Luis & all at Binaural for their hospitality & commitment.


from a review by Brian Olewnick / Just Outside:

An interesting take on the integration of field recording and traditional music....Here, clarinetist Joana Silva plays a composition by Henri Rabaud, "Solo de Concours", while walking through a rural landscape, dutifully followed by French and Costa recording her embedding therein. The clarinet doesn't appear until some 11 minutes in, but then occupies center stage, though Silva pauses often, allowing the landscape its say and drifts off into the distance on occasion.
....can imagine deriving enjoyment from the physicality of the experience, walking though glades, over streams, up hills, etc. while, in "3D", focusing on either the clarinet or the ambiance or both. I have to say the chain-saw encounter captures one's attention...
Posted by Jez riley French at 11:37 AM