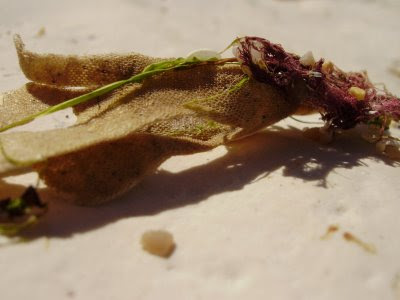 review from 'The Field Reporter' blog by John McEnroe:


‘The bright work’, originally published on 2009 and reissued on February of 2012, was largely made with hydrophones, very likely the ones Jez Riley French builds himself.
Hydrophones offer a very particular experience as what we hear is sound propagated through water, though a fluid. Fluids and sound waves have similar behaviors under certain circumstances, but what is interesting here is that the hydrophone hearing experience would suppose an immersive experience, but instead ‘The bright work’ seems to be more about textures, scales and friction. It’s like if water became a large membrane we use to listen to the surface of solid container of this water. A tactile and visual surface with detailed features and beautiful narratives.
Water and fluids acquire the shape of their container, they also tend to propagate and its behavior changes based on the molecular interaction with its container. On a more cultural approach water serves as mirror, the origin of the image. Anyway on ‘The bright work’ I’d say water is more of a metaphor to the space between ourselves and the things, to the distance we need to establish to have an image of things.
Water here works like some sort of a membrane, a magnifying glass, a medium to relate to the micro, to a reductionist approach through the possibility of listening to sounds otherwise inaccessible for human listening.
What is quite poetic here is what does Jez Riley French finds on this sounds that makes him want to play them to us. How his mediation as artist and sound capturer imprints his experience in these sounds: how his mediation imprints his emotions, thoughts, reflections and questions in the sounds we listen here.
‘The bright work’ is a work that serves to understand all the depth and transcendence behind the premise that in sound art sound is both the medium and subject. There is an immanent sort of “extraordinary” and revealing element in the hearing experience, in the reduction of the hearing that puts the listener in contact with something that he can’t necessarily comprehend but that he feels and experiences. This is no longer a metaphorical, figurative and descriptive process: this is sort of a metaphysical exercise: a way to sensibly address questions about ourselves and about the world.
Again, ‘The bright work’ is a very successful work as it provides a universal sense to the act of Jez Riley French recordings the water of some specific sites with hydrophones. The sense found here is the sense of relating to the world and relate to ourselves in a way different to the question / answer approach. More like if we subtract ourselves intellectually in order to feel the cosmos we are part of and have an actual meaningful transcendent experience. 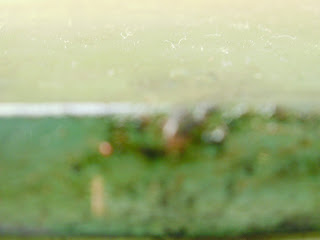 Jez riley french - as (urfaces) as001 (mp3 extract)
a few copies of the 'as (urfaces)' cd & print set to accompany an exhibition of work completed during my time as artist in residence at Hull School of Art & Design are now available. There are only a handful of these left though.

details of the pieces included on the cd can be found by clicking here.


review from 'just outside' (Brian Olewnick):

'a more purely field recording-oriented release (though French bows or otherwise touches various surfaces on three of the six tracks). Here, one's reaction I find often depends "simply" on how intriguing one finds the given sound-field in play. Even there, you're almost compelled to give a deeper listen if, initially, you're not so fascinated; often there's more at hand than you thought. The one unenhanced cut that I immediately loved was the fourth, "as030", which features a motor of some kind (I think), it's strong, subtle and varies hugely within a narrow focus. The lengthy final track, the one on which bowing can most clearly be discerned, works pretty well also, a rich range of rubbing-induced groans....one can easily imagine wallowing it it with pleasure in an actual installation. It's a good disc....'

A composition of untreated field recordings capturing the seating fabric and floor surfaces of Peel Hall, Salford, prior to giving a performance there later the same day. I enjoy the simple pleasure of spending some time quietly exploring like this - listening to the audible silence of objects and environments that surround me. Recorded November 2008